My QTH and our Samoyed dogs
Click to enlarge the pict. 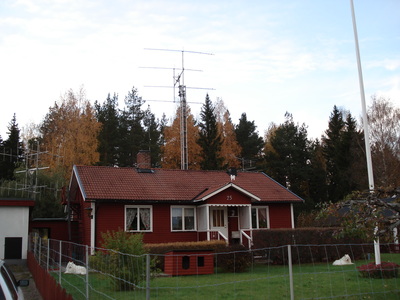 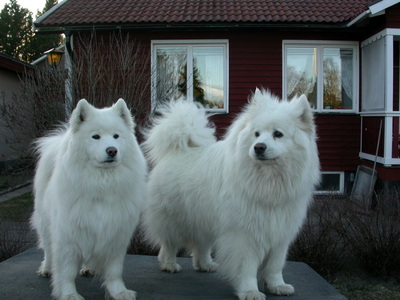 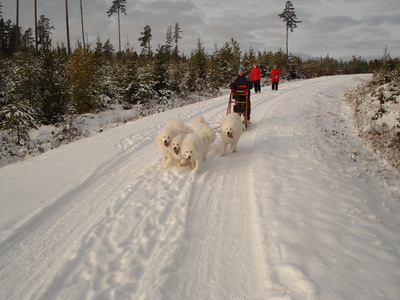 I got my Class-B license 1961 as SM1CUI on Gotland island where I was living at that time.
1963-64 I made my military duty at the signal troops in Uppsala, and got my Class-A license.
During that time I met my wife, and we got a son 1965.

1966 I started my own company with radio and TV service in Uppsala.
We built our house 1967 in a village with 25 houses where I still live, and with the same wife !
She fortunately understands my hobby, and accepts all the time I spend with my hobby.
1969 we also got a daughter, and both of our children still live 35 minutes away with car.
At that time colour TV started and Sweden got a second TV channel on the UHF band.
It was a lot of work learning the new technique, repairing and mounting UHF antennas.

For myself I had time and possibility to set up several antennas for HF and V-Uhf.
I was active on many bands, but priority on the 144 and 432 MHz hunting new grids.
1971 I got my first diploma. I won the VHF activity contest in my district that year.

I worked a lot Aurora and MS. HSCW with a 4 speed tape recorder and programmable bug.
In my work I bought TV antennas from Wisi in Germany. They had a broadband VHF-antenna up to 150 MHz.
You can still see them up in the air in my system today.

1982 was a discussion about exchange of the QRA locator system to the one we have today.
I gave up ham radio, and the basement shack became a larger room for one of the children.

1985 I finish my company and was employed at the FM/TV Broadcast station in Uppsala.
That was like a new start of my life, away from stress, and could work with what I like most.
Learned me all about high power transmitters like 10 kW FM and TV TX up to 40 kW output.
Not only all kind of transmitters but also how to measure antennas and feeder cables.
I was travelling all over Sweden and later also to Aland Isl. OH0 for repairing a new TV-TX.

2002 after 20 years QRT I decided to take down the tower and the old antennas to clean them.
I had enough of radio in my job, but now I was ready to be QRV again.
Painted the tower and built it up again. From my job I got the cables, 1 5/8” and 7/8”.

With four of my small 1.6 wl (3.3m) 10 el. Yagis I now heard my first ever EME signals.
My old home made PA with 2x4CX250 B was still working with 1kW out at key down.
Franco I2FAK was the first station in the log July 14, and I was more than happy.
It was possible to make CW-EME contacts with “TV-antennas”.

Participate in contests was a big difference when you now could use a PC.
With a push on a button you now send the log, and have the results on the screen soon after.
Earlier I had to handwrite the log and measure the distances on a map for every new station.
Then send the log in a letter, and see the results a month or two later in the national magazine.

During the coming years I made a lot experiments with different antenna constructions.
I will put some pictures and text later under ”My Antennas”.

2006 I was retired at an age of 62, but still have good contact with my former colleagues.
Sometimes they call me and ask if it’s something I need before it goes to the junk box.

The rest is history. Thanks for reading. 73 / Rune